While it may appear that all I’ve been doing in Los Angeles is playing, I did in fact come here to get some work done. Some network! Get it? Work… network! #sorrynotsorry

Anyway, I’ve had the opportunity to meet some wonderful people here and will soon be compiling all the advice they have given me into one handy post. But for now, I’m just going to keep posting the fun stuff!

Tuesday was a REALLY EXCITING DAY.

(The only picture I took on Tuesday.)

Yeah, so Tuesday I spent the day writing and emailing and jumping at the banging noises from the kitchen. Hugo is a sneaky teenager (I blame his adolescence for us not getting along.) and continually ducks in and out of cupboards in search of a “hit.” I finally got up and found him in the top cupboard, next to the fridge, head deep into a torn up food bag.

Wednesday was also mostly filled with more of the above but I needed to leave Narnia so I decided to check out Universal Studios City Walk.

Finding something in walking distance is super rare for LA, but luckily Universal Studios is about a 40 minute walk from Ryan and Hayley’s place; (or 25 minutes plus a free tram* up the hill.) I was going to walk but the tram was right there, so naturally I hopped on. It takes you all the way up to the entrance of Universal Studios and what they call “City Walk.” City Walk is basically just a sweeping row of restaurants, tourist shops, and restaurants and tourist shops.**

*The tram loads diagonally across the street from the Universal City metro stop.

It was neat, but not exactly a “must see.” The real reason I went up there, though, was to catch a movie.

Mild digression: Every year I tell myself I’m going to see all the films nominated for Best Picture; and every year I’ve gotten really close, but never quite made it. This year, however, I WILL do it! (I mean, it’s really not that complicated, especially in this day and age.***)

So I bought a ticket to Gravity. (I realize it’s shameful that I hadn’t seen it yet, but I was really busy last year, okay?!) The theatre up there is massive, boasting 20 screens. Unfortunately it was no longer in IMAX (Damn you, Jack Ryan: Shadow Recruit.) but I was still blown away from seeing it in 3D. Gravity is truly a jaw dropping cinematic feat that will surely win several technical Oscars, but I sort of wish they’d done one more draft on the dialogue.

****Unless you’re pretending to be a pirate, like, a real one, not then internet kind: in that case, carry on.

Exciting even at night!

Thursday I had plans to meet up with Jake (a classmate of mine from VFS). He just recently moved down to L.A. permanently, but, being California born and bred, knows a lot more about the city than I do.

He picked me up and, after some much needed coffee, we drove up to Griffith Observatory. I’d already been up there (on Nisha’s last day) but it was nice to spend some extra time wandering around and taking in the view. 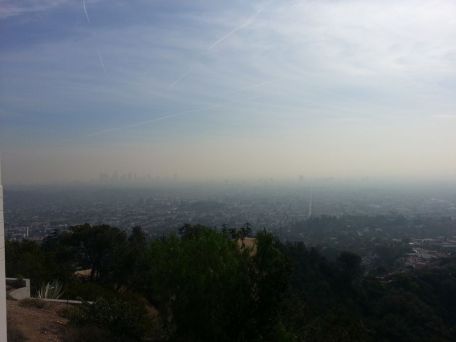 Kidding aside, it’s actually beautiful to walk around. We popped inside — it’s a legit planetarium in there — then made our way back down the hill (mountain?).  For our next stop, Jake drove us to the Academy of Motion Picture Arts & Sciences Margaret Herrick Library. (Say that five times fast.) The building is gorgeous, but the inside is actually pretty mellow, at least for what I assumed it would be like coming from the people who put on the always ritzy Oscars.

We browsed around for a while, enjoying the massive selection of film and television books, saw a real Oscar, (!!!) (All About Eve – Best Costume Design, Black-and-White), and enquired into seeing production notes and scripts. (They have a gargantuan collection, but most requests take 24 hrs to process.) You can’t psychically check anything out of the library, but it’s a fantastic research resource for anyone spending time in L.A. 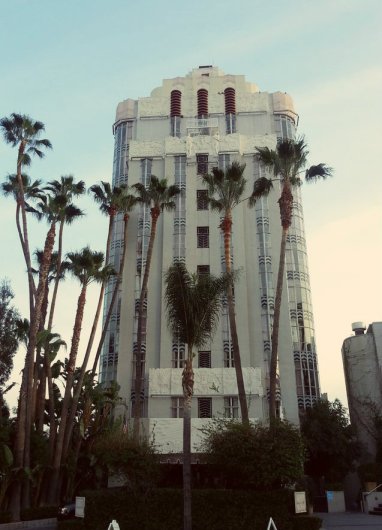 A hotel on the Sunset strip.

I hadn’t spent any time on Sunset Blvd, so we decided to drive down the infamous strip to find some food and pick out famous sites (Chateau Marmont, The Viper Room). I was craving Mexican (I’m always craving Mexican.) but Jake pointed out another place and I (temporarily) let go of my taco craving. And I’m glad I did, because it turns out that he was taking me to the diner from American Graffiti.

A classic, All-American spot, we ordered some greasy food and played Tom Petty’s American Girl on the jukebox. 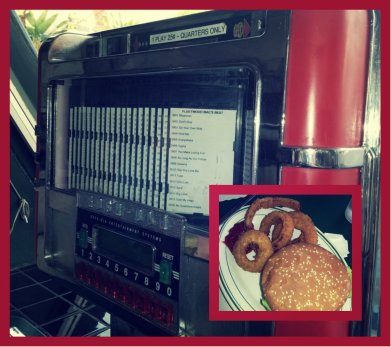 Unlike Vancouver institution, The Templeton, the jukeboxes actually work here.

I wish we had more classic diners in Vancouver. Screw the Cat Cafe, I want waiters on roller-skates! We finished up our tasty (and artery clogging) food, then Jake headed off into the smog as I took to the Boulevard to wander.

I had plans to meet a VFS Writing alum in a few hours and was going to sight see up and down the strip until that time, but was feeling quite sleepy. Just as I was getting deep into my daydream of Nap Cafes***** I spotted a movie theatre! Hallelujah!

I’d stumbled upon one of Robert Redford’s Sundance Cinemas. It’s a 21+ chain where they serve drinks, fancy coffees, meat plates, edamame, you name it. The seating is reserved and the chairs large, cozy, and equipped with side tables. Now that’s how you’re meant to watch a movie! I picked Philomena, purchased a large Americano, and settled in.

After it was finished, I had the perfect amount of time to walk down Sunset and meet VFS alum, Lynn, at The Cat & Fiddle.

*****This seriously needs to be a thing in major tourist destination cities. When you’re too far from your hostel/hotel and need a little break, you just know you’d pay $15 for a clean place to sleep for a couple of hours.

Lynn is super awesome and had a lot of great advice. (Combined advice article is forthcoming.) We had a drink and a snack then headed back onto the Blvd in search of the Nerd Melt Showroom. The Nerd Melt is a comic book/graphic novel/action figure Mecca with a back room built for storytelling, sketch, and stand-up shows.

That night was a storytelling event called Risk! and the theme was “freaky.” I love storytelling nights. (Really looking forward to the Rain City Chronicles‘ Love Hangover when I’m back in Vancouver. (Tickets still available, but they go fast!)) We settled in and it was quite the show. There were hilarious stories and heartbreak stories and meth stories and ghosts stories. It’s so cool to hear someone share something that’s meant so much to them. I sincerely recommend finding a storytelling night to go to, whatever city you live in.

Whenever you’re in L.A., though, I insist you check out Nerd Melt’s website. They’ve got so many shows with tons of recognizable actors and just quality entertainment. It’s a great addition to the UCB and Groundlings circuit. Thanks so much, Lynn, for taking me!!