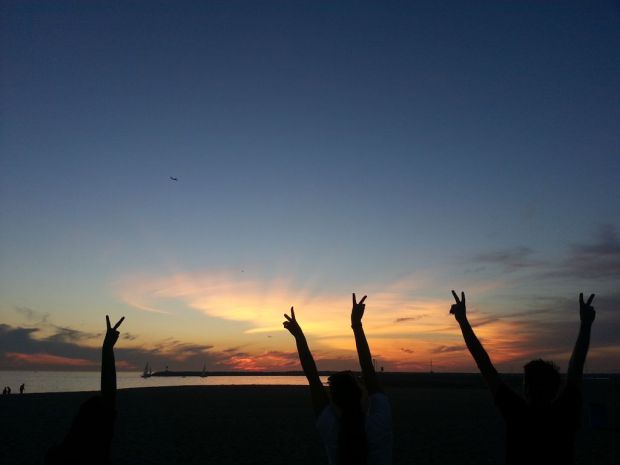 This is what, I believe, the kids calls “#nofilter”.

I’ve been in Los Angeles for nearly 20 days. (Say what!?) And today I miss Vancouver. The fresh air. The rain. The short distances between boroughs. It’s a god damn beautiful city and sometimes I have to leave for awhile to remember that. If you live in Vancouver please consider yourself very, very lucky.

*This post was written over two days. Today the sun came out. Yesterday it rained. People in L.A. LOSE THEIR MINDS when it rains. It’s hilarious. Actually, it’s pretty much exactly what happens to Vancouver when it snows. I highly recommend this Jimmy Kimmel video. So funny.

So the temperature has dropped. It got down to 50 last night (10??*). It will probably get up to the mid 60s today; still a treat for January, but not the warmth I quickly got accustomed to when I first arrived.

So, brief, fleeting homesickness aside, (I know, STFU Kelly, no complaining from you! But I’m just being honest…) L.A. is still frickin’ L.A. I guess I’m just grappling with the loss of my romanticized fantasy Los Angeles. But cities on pedestals shouldn’t throw stones. (What?!) California is known worldwide as a dream destination, and for good reason.

Day 9 (a Saturday) was a magical day. We rented biked in Venice and rode them all the way to Manhattan Beach. (A solid hour plus ride.) I (barely) managed to keep up with rockstar athletes, Ryan, Hayley, and Nisha. We only ducked onto the road for a short while and the rest of the ride along the beach was stunning.

Clearly I’m having way too much fun with Pixlr.

It was an incredibly gorgeous day. It’s moments like that where I would sell a little piece of my soul to live here.** We arrived at Manhattan Beach and set up camp next to an empty volleyball next. Hayley and Ryan’s friends were still on their way so we decided to test the water. We dipped our toes in and it was, yes, decidedly freezing, but hell if I’m not going swimming in January! After a bit of wading and much reassurance from Hayley that this wasn’t the beach the great whites like to hang out at, we dove in. (Upon later reflection, we realized said beach was only TEN MINUTES AWAY. Seriously, watch this video.) The water was gorgeous and refreshing. I even ducked in a second time later in the day. (And half-heartedly attempted to surf. But, yep, still no upper arm strength on this girl.)

**Which I’m pretty sure they collect at the DMV in exchange for a California driver’s license. (The shards of soul are then tossed in the air to rest above the city as a cloud of broken dreams.)

After we towelled off, Hayley’s co-worker/lovely lady Katie and her finance, Ned, joined us as well as Ryan’s friend, Nate, his girlfriend, Batel,*** and their friend Kyle. Tequila in hand, it was time to play volleyball. I begged to be left on the sidelines (While I played a lot of sports growing up, I always abhorred volleyball.) but, alas, to no avail. It was, shockingly, actually really fun! Clearly elementary school volleyball should be taught on a beach and missed hits should not be punished with the popular girls laughing at you, but with shots of tequila. We played a game called “Ace“. It was super fun and my awful playing even got mildly better. (Big ups to Ned and Nate for teaching me!)

***Massive apologies. I’m almost certain I’m spelling that wrong. (But maybe you should make yourself easier to Facebook stalk?! 😉 )

Then the tequila was gone and the bikes needed to be returned so we bid adieu and promised to meet up in a few hours. Nisha, Hayley, Ryan, and I hopped on our bikes and journeyed back. The ride back to Venice was even more beautiful than the ride there. We almost made it back before the sunset (but, obviously a photo shoot was necessary midway). We managed our bikes fine in the dark and then, just as we were pulling into Venice Beach and I was thinking about how incredibly perfect the day was, I kid you not, fireworks started going off behind us. Glorious.

We returned our bikes and nabbed some massive pizza slices before hopping in the car and heading home. We showered and I started getting ready to go out, but you just know after a full beach day and two hour bike ride there was no way we were making it back out; so Nisha made us some dinner and we totally crashed. A perfect California Saturday.

The panorama option on my camera, with varying degrees of success.